August 15th is a very special day for India because it marks the anniversary of the country’s independence from the British Crown on August 15, 1947.

India Independence Day, also known as India Day, is a call for celebration – with parades and tributes held across the country, people commemorate this national day by waving India’s tricolor flag from rooftops, spending time with family and close friends, and celebrating the many rich, diverse cultural traditions of India.

India’s independence was officially declared in 1947 after a long fight to be a nation independent of British rule, making India Day a time for both celebrating freedom and commemorating those who fought for India’s freedom.

The First Independence War of 1857 ended with the British Crown assuming control over India. Then, in 1919, a British judge passed the Rowlatt Act, a piece of legislation that allowed the government to imprison someone suspected of terrorism indefinitely and without a trial. Under this Act, anyone attempting to revolt against the British rule was placed in prison, making it even more difficult for the people of India to gain independence.

Due to growing feelings of protest, the judge enforced several bills that became known as the “black bills” that gave even more power to the government. People described these bills as “No Dalil, No Vakil, No Appeal,” or “no pleas, no lawyer, no appeal.” In response to the new legislation, activists launched a series of peaceful protests.

The leader of the opposition was an Indian activist named Mohandas Karamchand Gandhi, also known as Mahatma Gandhi. He believed in the power of nonviolent civil disobedience, and it was Gandhi’s influence that helped lead the country to a revolution, and ultimately, gain independence from British rule. In India, he is still revered for his work and teachings, also known as the Father of India.

On August 8, 1942, Gandhi launched the Quit India movement, or the India August Movement, at a session of the All-India Congress Committee. About five years later, India finally gained their freedom from British rule upon the signing of the India Independence Act 1947, and to commemorate this moment in history, Jawaharlal Nehru, the first Prime Minister of free India, spoke to the country on August 15, 1947.

How does India celebrate independence today?

During the prime minister’s speech, he raises the Indian flag over Red Fort, a historic site in Delhi, which is followed by a 21-gun salute. The prime minister then gives a speech over the ramparts, highlighting the achievements of the past year, and urging the country to move forward together. The ceremony also pays tribute to the leaders of the Indian Independence movement, and sing the Indian national anthem, “Jana Gana Mana.”

Many other flag-hoisting ceremonies also take place across the different state and local governments and schools, along with parades that portray the struggles of the independence activists and showcase the diverse cultural traditions of India. In addition to the parades, many government buildings are strung with lights, and tricolor flags adorn clothing, cars, and houses as a symbol of patriotism.

But the largest India Day Parade outside of India goes to the parade in New York City. The Federation of Indian Associations hosts tens of thousands of people who participate in a celebration of all things India,   with dozens of vendors, dance performances, music, and speeches. The mayor of New York City usually leads the parade, and special guests are often invited to speak, such as Bollywood stars and local elected officials. Here are images from 2017 parade, all of which can be found here: 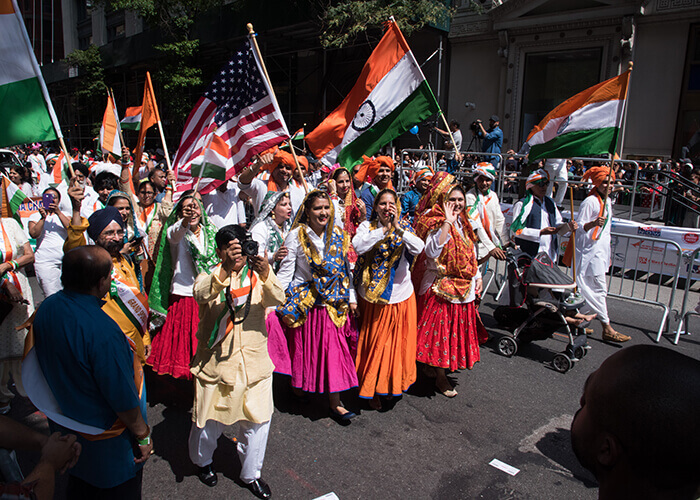 There are between three and four million people in the Indian-American diaspora, and the celebrations of India Day have only increased over the years. Cities across the United States, such as Los Angeles, Seattle, Boston, and Chicago, also host festivals and events in celebration of India Day. New York legislation declared August as Indian American Heritage Month, and Minnesota proclaimed that August 15th would be known statewide as “India Day.”

We hope you and your loved ones have a happy India Independence Day. Commemorate the day by sending a monetary gift to your family and friends around the world using Remitly.

Holi Festival Guide: How to Celebrate around the World

Holi is one of the most popular holidays around the world, so no matter where you are, you can celebrate this festival of colors.

Bengali New Year: How to Celebrate around the World

No matter where you live, you can get into the spirit of the Bengali New Year, or Pohela Boishakh, with this up-to-date guide from Remitly.